For the past ten years, a key pillar of our work at the Case Foundation has been focused on understanding and empowering Millennials to act on causes that matter to them. Since 2009, through the Millennial Impact Project, the Case Foundation has worked with researchers to engage more than 100,000 young people to better understand the dynamic between causes and Millennials, with a particular focus on what influences this impactful generation to act for social good.

Building off this work, and guided by both the answers and further questions this research raised, we turned our eye now to how a segment of this generation, Young Americans between 18 and 30, were viewing key issues. Marketers and product developers have long felt that the 18-30 phase of life is when lifelong consumer behaviors are formed, and, therefore, we also explored what influences play a role in social causes for this generation during these formative years.

Highlights from the Influence Nation Summit

With this goal, we supported INFLUENCE | SG to host the Influence Nation Summit. We were delighted to take part in the inaugural Summit this month to share in the discussions on what builds and sustains movements. The summit brought together nearly 400 people to the National Geographic campus here in Washington, DC. Speakers passionately covered many of the key social issues of concern today from climate change and the impact of plastics; to civil rights and issues of race; to gun safety; and LGBTQ rights. Here are only a few of the key moments from the event: 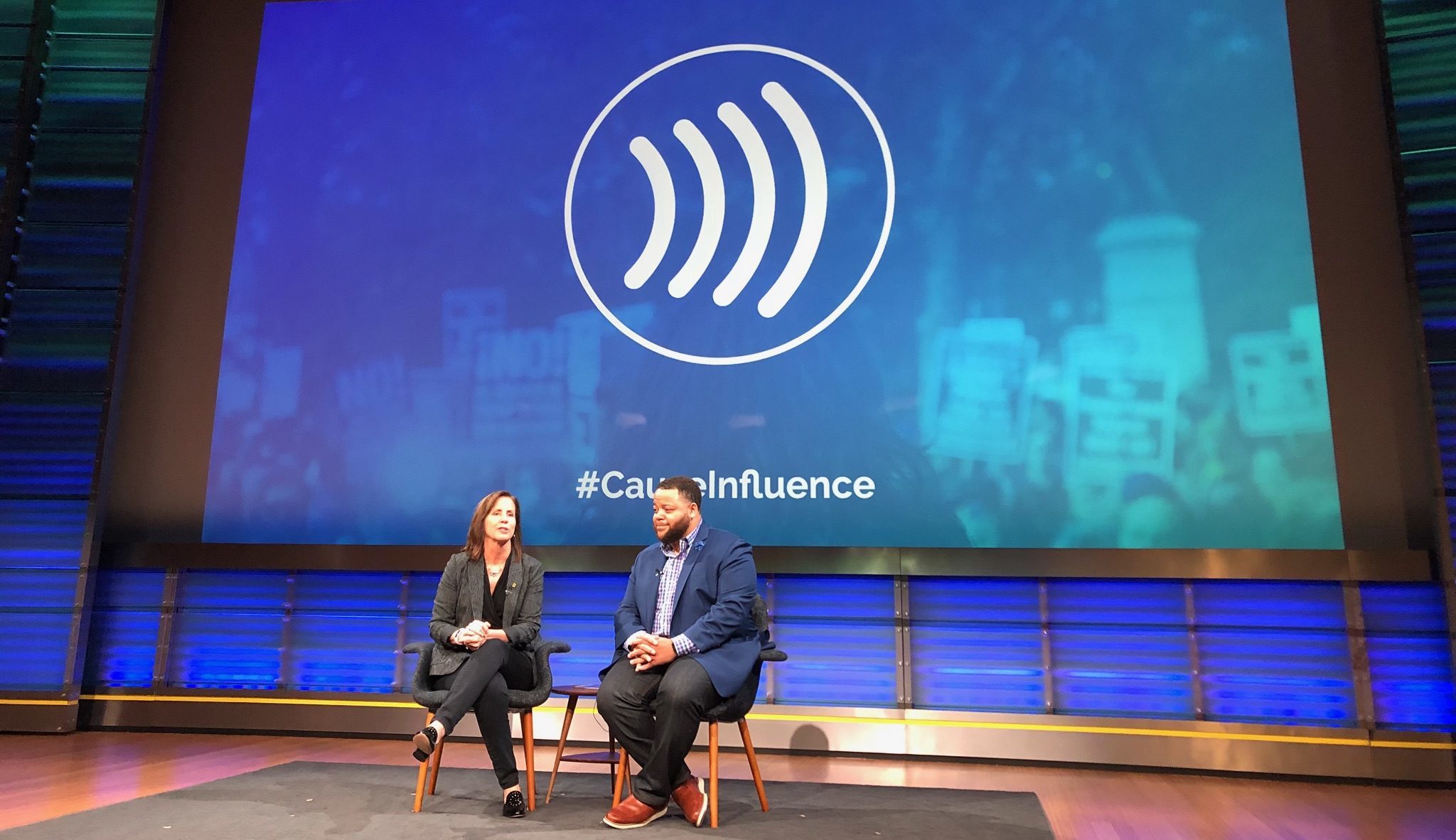 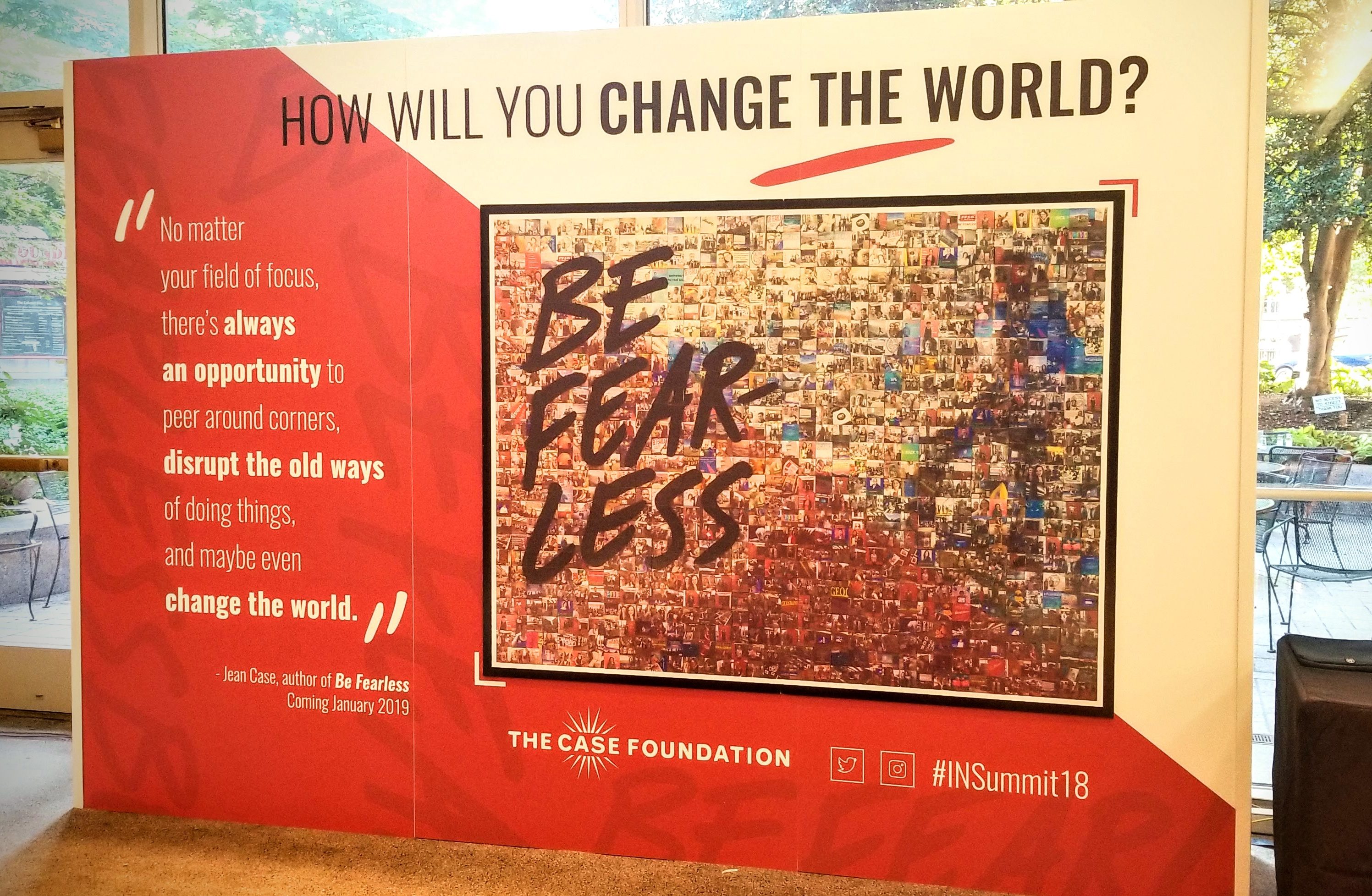 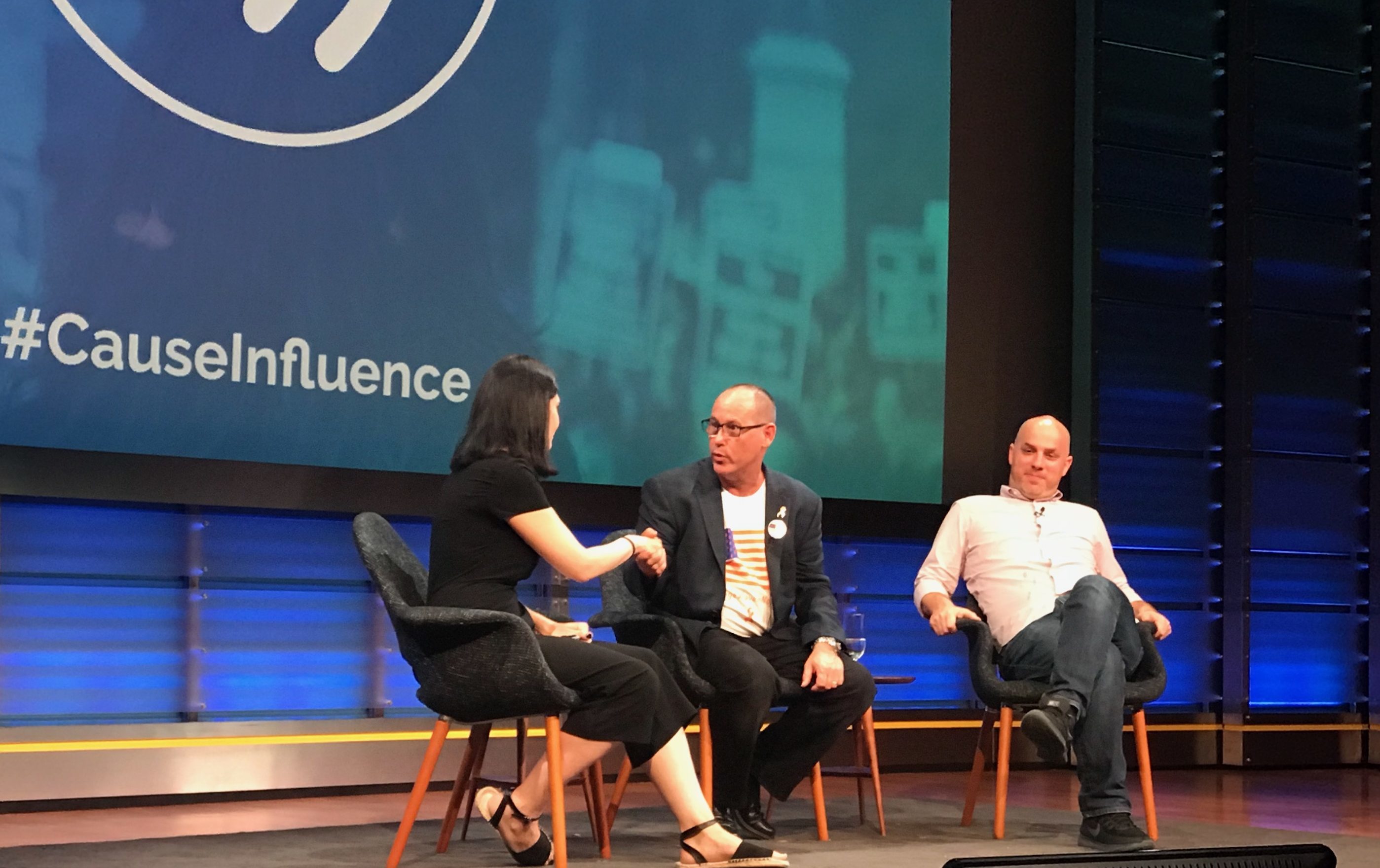 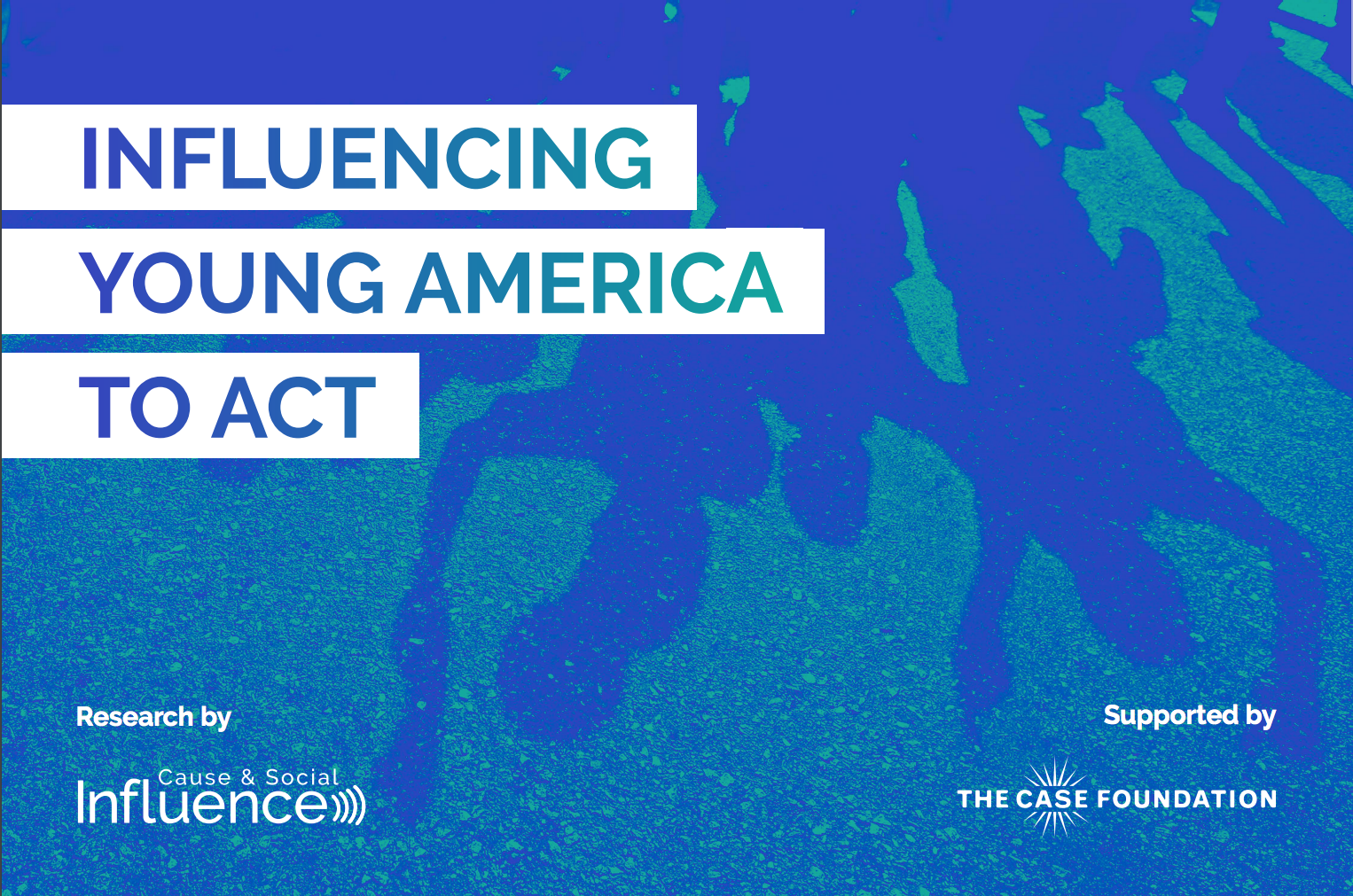 The issues and movements highlighted at the summit are among the key social issues and movements that young Americans raised in a nationwide survey of 1,100 Americans between the ages of 18-30 that Cause and Social Influence fielded in August. As sponsor of this research, we are excited to share the results of this initial research as it can inform all those who work in the social sector—nonprofits, corporations and government—as well as the media, about the motivations and influences that lead Young Americans to take action on the issues they care about. For example, the leading issues of concern for survey respondents are: civil rights/racial discrmination, gun safety, immigration and climate change, which were all brought to life on stage through robust conversations at the Influence Nation Summit.

Within the full report, there are a number of other valuable findings, including these two important takeaways.

In our past work researching the Millennial generation, we, like many others, have noted the powerful role of peer influence when it comes to partaking in donations and volunteerism. Therefore, were were surprised to see that among the 18-30 year-olds surveyed, television news media was cited as the primary way Young Americans became aware of social issues.

To understand the degree of television media’s influence, you have to look at each individual issue:

Meanwhile, social media was still the number one way that they learned about social movements like #BlackLivesMatter and #MeToo. The role of TV news media continued to show its power in movement building for this generation as the second most cited source of awareness about major movements and the number one source for the movement #AllLivesMatter.

Young Americans believe their influence can have an impact and state an intention to vote in the November Midterm Elections.

While intending to vote does not always translate into actual voting, 66 percent of respondents said they intend to participate in the midterms this year. Young Americans, to varying degrees across demographics, believe they can best exert their influence on government to create the change they want to see through voting. Specifically:

The research shows a significant interest in exerting influence on government by voting, both because a significant portion of those surveyed do not think the the country is going in the right direction and they have low trust in government to do the right thing. According to the survey, 48 percent of Young Americans think the country is going in the wrong direction. This dissatisfaction outweighed the 27 percent of respondents who thought the country was on the right track.

When it comes to trust, the only institutions that young people find less trustworthy than government are corporations. In order of most trustworthy to least trustworthy, respondents listed key groups as follows:

In light of this less than positive outlook on government, it is heartening to see that Young Americans who were surveyed are not intending to sit on the sidelines. They want to do something about the issues that concern them, and we hope to see this interest turn into action and increased voting this November.

As we embark on this extension of our past work and continue to explore not only how 18-30 year-olds in America consider social issues and major movements but what influences their interests and willingness to act, we welcome your comments, insights and voice in sharing this work and its findings. We look forward to continuing this conversation on Twitter, Facebook and Instagram using #CauseInfluence as well as in the Case Foundation’s weekly newsletter, Breaking Good. 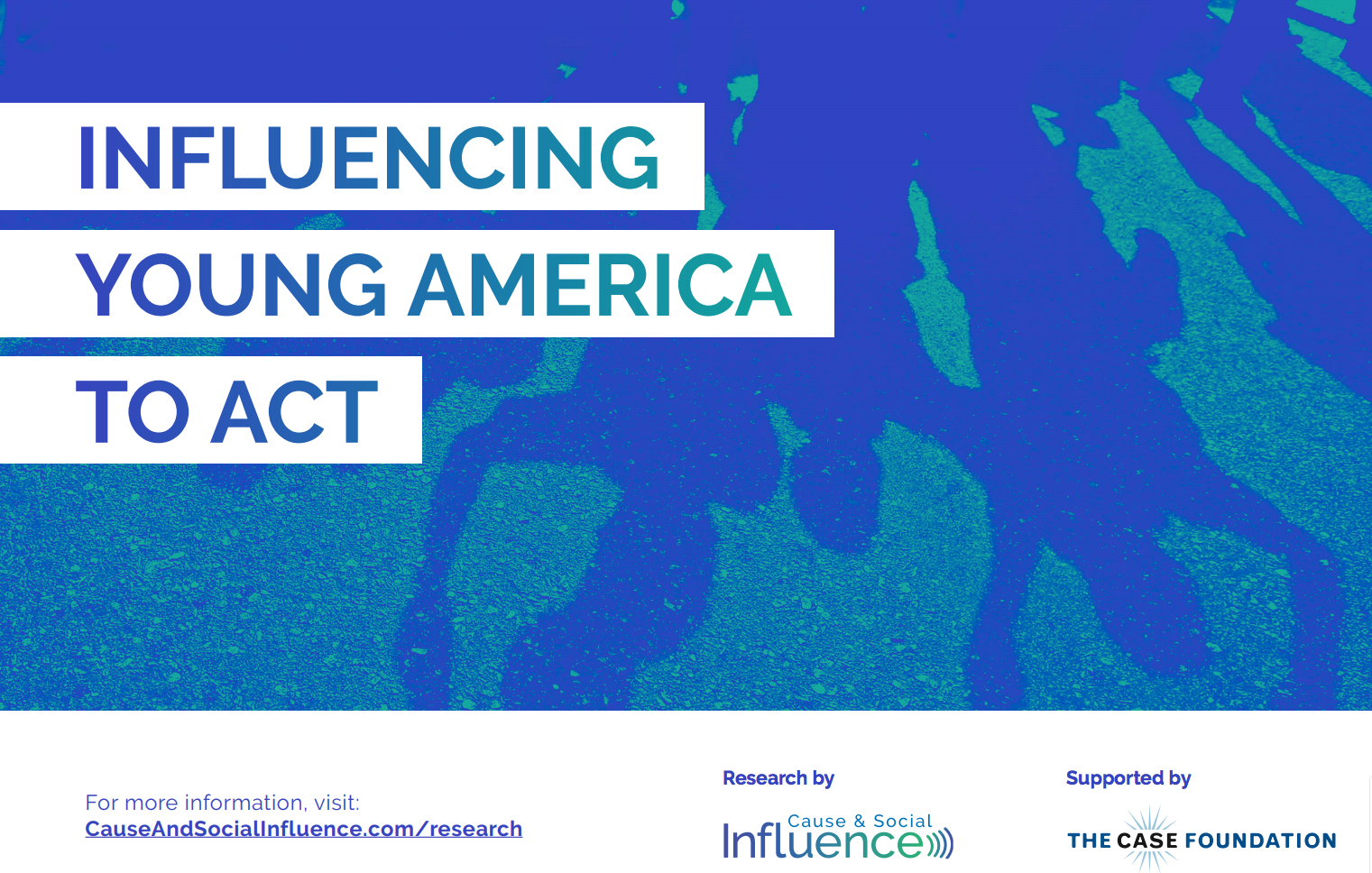 As Vice President of Social Innovation at the Case Foundation, Sarah leads the inclusive entrepreneurship movement, which works to create the opportunity for women entrepreneurs and entrepreneurs of color to grow their businesses.
follow @sarahtkoch Learn More

Key Takeaways from a Decade of Millennial Research

The Millennial Impact Report: 10 Years Looking Back is the culmination of a decade-long focus on millennial cause engagement.